Overcoming the conflicts and restoring hope

In Sudan, a peace agreement was reached in 2005, putting an end to the 21-year civil war between the north and the south. In 2006, AAR Japan started mine risk education.

When I visited a village called Shalalob to conduct a survey, I met a woman who was unable to take her child to a hospital due to a lack of money and a lack of access to a car. When she asked why we came to the village, we explained about mine risk education. She responded, “How come you are so eager to save our lives? Tell me where landmines are. I want to step on a landmine to put an end to my miserable life.”

The AAR team was shocked to hear her words. I realized that the lingering civil war had not only left landmines and unexploded ordnances (UXOs) in Sudan, but also left the local people in poverty, despair, and sorrow. 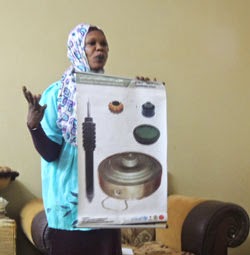 One of our local staff, Amaeim (center), explains what landmines look like and where they are likely to be found by showing a poster.

It is essential that we, AAR staff, help local people restore their hope for the future, in addition to educating them on the measures to protect themselves from landmines and UXOs. We took our time to convince her how precious her life is and how much her very existence means to those around her.

A week later, she came to the mine risk education session, held in Shalalob, and told us that she would support our anti-mine actions. While the protection against the dangers of landmines and UXOs is difficult, “the restoration of hope for the people in despair” is an even more challenging mission. However, the difficulty must not deter us from trying. AAR is determined to continue its activities for the people of Sudan. 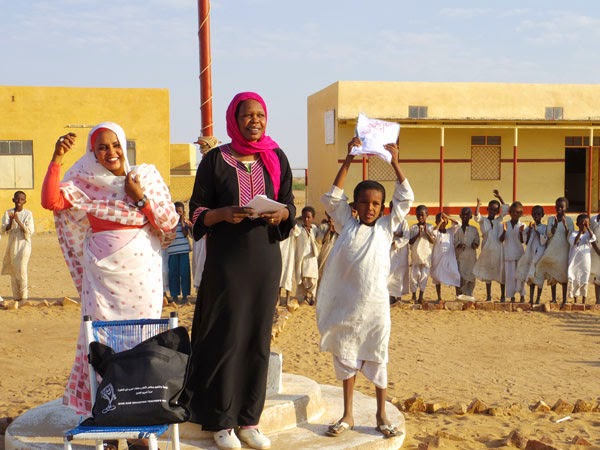 One of our local staff, Amaeim, with the winner of a quiz show at the mine risk education session. (Kassala, January 29th, 2014)