In Pakistan, approximately 22.8 million* children of school-going age (5-16 years old) are out of school, which is the second-highest level in the world. The school enrollment rate for girls, refugee children, and children with disabilities are particularly low. Some reports show that the rate for children with disabilities is less than 5%. There are various reasons why many children are unable to attend school, including poverty and other economic backgrounds, social customs that do not emphasize schooling, and school facilities that are not accessible. 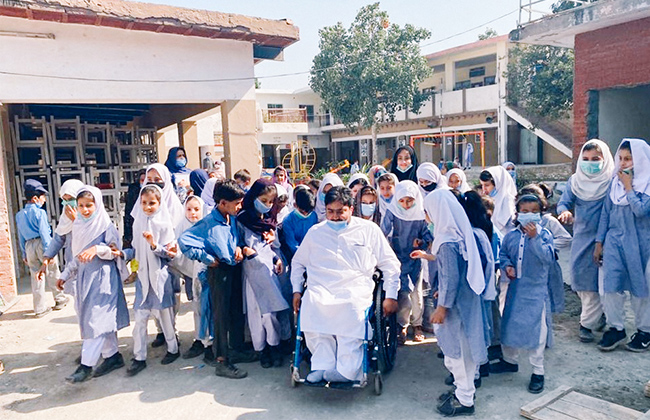 AAR local staff (center) conducts a session for students to think about disabilities as their own.

AAR Japan promotes inclusive education in elementary school, aiming for all children to learn together in the community where they live, regardless of their disabilities. We are working to make school facilities accessible, provide workshops and training on disabilities for teachers and children, and improve the educational environment.We also provide schooling support for out-of-school children and link them to government services.